The Delegation Event Model in JAVA 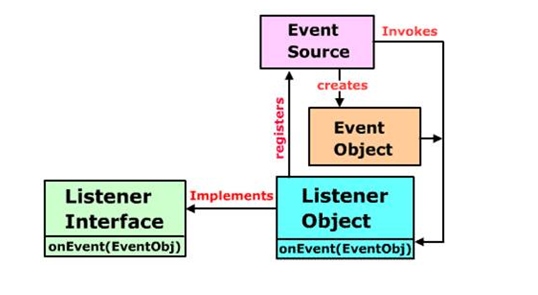 The Change in state of an object is called as an event i.e. the event describes a particular change in the state of a source.

The Events are generated as a result of the user interaction with Graphical User Interface (GUI) components.

For example- Clicking on a button, movement of the mouse, inserting a character through the keyboard, selection of an item from the given list, scrolling of the page are all of the activities which causes an event to be happen.

The events can be generally classified into following two categories:

Now Event Handling is the mechanism that has control over the event and decides what should be happen if an event occurs.

This mechanism has the separate code which is known as event handler which is executed when an event happens.

The Java uses a Delegation Event Model to handle all the events which defines the standard mechanism to generate & handle the events.

Let’s have a look on the brief introduction to this model.

The Delegation Event Model has following key participants as:

Following are the Steps to Handle Events

©2021 MYBSCIT.com. An initiative by some failures to make student scholars.